In 2011 Coca-Cola launched one of their most creative campaigns in the company’s history. Putting up a giant billboard in the Philippines covered in over 3500 Fukien Tea Plants, which was then photographed hundreds of times and shared over social media. Coca Cola then used the stunt to claim to be raising awareness of environmental issues. Now anyone with a touch of tact in marketing knows that their real aim was first and foremost to raise awareness of their own brand. However, the world is always changing, and it pays to be aware of bigger social issues, even if they don’t necessarily relate to your business, A good marketing campaigner knows almost anything is an opportunity to put your name out there.

Pollution and taking care of the environment have always been big topics, article after article is shared every day on how we can save our planet, and Coca Cola was sure to take this opportunity to ride the wave of highly shared content. Now you might be thinking “Coca Cola’s the biggest soft drink company out there, why do they need to advertise?” But the world is a competitive place, and as long as there’s a kid out there buying Pepsi or Fanta, they’ve still got work to do.

A proactive approach to engaging your audience 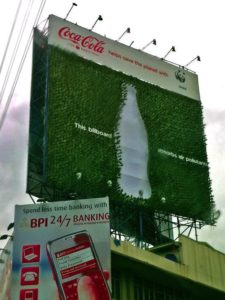 Now you might be thinking “Coca Cola isn’t exactly an environmentally friendly brand,” but they spun the topic to their favour. The first extremely clever thing about this campaign taking their already environmentally unfriendly product (plastic bottles), and spinning it completely on its head, placing the responsibility of environmental welfare on their customers. Coca Cola’s spin was that they were working very hard to provide their customers with an awesome drink, and are now asking their customers to take responsibility for the environment when they consume their product. This immediately creates a sense of comradery, saving the world and drinking Coca Cola now seem to be somehow related, and this is the first subtle but genius thing about this campaign.

The second, and most overlooked genius element of their campaign is that the billboard in question was actually placed in the Philippines! Most people might think that to pull off a big public stunt like this it would have to be somewhere densely populated in America, but Coca Cola’s marketing department were clever enough to realise that because the campaign was mainly a viral marketing one it didn’t actually matter where the billboard was placed, most people would probably just imagine it was in America anyway, (because that’s where everything happens, right?). This means Coca Cola were able to set up the Ad for relatively cheap compared to what it may have cost in America, and still get the same bang for their buck either way.

The first step to international success

The single most important aspect of a reliably reproducible viral campaign, it may not be easy, but it’s a consistent method you can use to fuel your audience growth, Create News. See how Coca Cola didn’t wait for some eager Filipino reporter to swagger on by and write himself a story? They seeded that article themselves, and left the sharing up to the news outlets who combined have a much more engaged Social Media fan base than they do, ensuring there were multiple funnels from which audiences could be directed back to their company brand. Richard Branson did something similar back when he was still in school with his infamous Student Magazine Ads, but that’s a story for another time.

The secret to getting more shares on your content

At the end of the day, like many good marketing schemes, Coca Cola had mastered the art of subtlety. People don’t like thinking that they’re being sold to, so thus by their very nature the best marketing campaigns are indirect. Coca Cola cleverly masqueraded their campaign as being a stunt to raise awareness of environmental issues and, however true that may be, it can’t be overlooked that their first and foremost goal was to raise awareness of Coca Cola. The genius of selling without selling in the modern age is that an indirect sales approach increases the shareability of your content, meaning it’s liable to gain massive traction in organic reach. 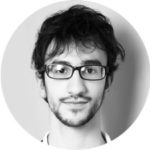 An entrepreneur since 18, Mikey has primarily concerned himself with what separates a successful ompany from an outstanding one. He’s always looking to innovate new ways to allow his readership to take their businesses to unexpected heights.

Want to learn the secrets to an outstanding business? Get your FREE management software cheat sheet below, detailing all you need to know about essential software to help manage your business!